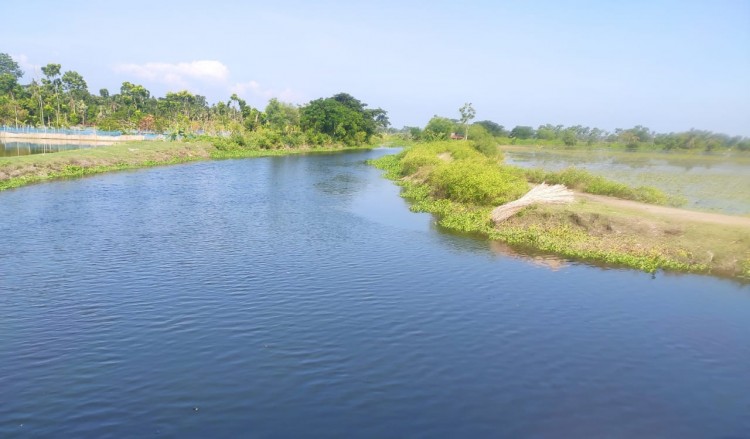 The last time we met Rohini Sarkar of Malda district was in 2007 at Panchanandapur, near the banks of the Ganges. Rohini Babu lived in Bhutni Diara and was a soul of that place. He was a Left party member once. He fell from the grace of Left party leaders after his protest to prevent the river erosion. He turned from Leftist to a Humanist, and began to strive for life and sustenance. He had acquired the “Ring Bandh” to protest against erosion. Rhyme was his language of protest. The inhabitants of Bhutni gained their rights through this rhyme. It went something like this - “Erosion has to stop/ Have to block it with stones/ Dams on all the sides/ Protect us from flood/ Give us bridges/ Give us electricity in our farms/ Give us irrigation.”

While narrating his account, Rohini Babu let his waist fall against the chair and straightened his bent back. He let a deep breath, and continued to speak about the river. The river is the destroyer and the preserver - it breaks at one side and builds at another. The people of Malda call erosion “Kata”(cutting) - the cutting of land by the river. The land that has been eroded by the river is called “Shikasti Land” by the locals. The new land formed by the alluvium at the heart of Ganges, is called “Payosthi Land”. These new formed lands are known as “Char”, for instances Khatiya Khana Char, Kolkata Bazar Char etc. The nomenclature of these Chars is supposed to be a commendation for the new lands, but in reality these names are condemnations. Let’s say for instance Kolkata Bazar Char. The inhabitants of Kolkata get every bit of benefit - transportation, education, health, electricity, roads, agriculture, food - everything is on the boom there. In comparison, a slice of Char that has appeared at the heart of Ganges gets nothing - insufficient colleges, no proper healthcare system, not even two proper meals a day. To imply the fact that these people are expatriates in their own land, and to indicate the stark contrast between the lives of the cosmopolitan and that of the inhabitants in these places, the Chars are named likewise. There are no bridges, no large wooden ships, or launch boats to connect the Chars to the mainland.

In order to connect them to the mainland, the locals of the Chars prepare “Khosa” made of tin. Now one may ask what on earth “Khosa” is. To answer our surprise, Tariqul, who stood beside Rohini Babu, explained that “Khosa” is a type of boat. It is named “Khosa” (Peel) because it resembles the peels of the banana flower Musa. Before he could end, Rohini Sarkar pointed his index finger towards the Ganges. One can see the tireless efforts of so many people, risking their lives and crossing the river on these Khosas.

The recent erosion and floods in the Kandhi region of Murshidabad have devastated the people living in these areas. This led to the composition of flood hymns. Jamaluddin, a man by the river, is a well known singer and composer. One of the songs he has written is - “The sands devoured so much of land/ The tides swallowed fertile farms/ The land of Pals from Panchthupi has become a desert/ I have seen with my own eyes/ What happened in 1338/ Fresh bunches of paddy/ Eaten by the waves of Mayurakshi”. Another folk poet of the Hijals wrote a similar song in 1363 - “The golden lands of Bengal are decimated in the year sixty three/ The life is not saved with Massanjore dam here.” The hymns regarding the flood of Murshidabad bring out the description of the lives of the people living here, with all the ups and downs, joy and sorrow, curse and boon.

Taltali village of Jalangi block in Murshidabad is situated by the bank of the Padma river. The Padma River is proverbially infamous. This very Padma swallowed the entire village of Taltali, submerging it in the year 1998, turning it into a watery grave. The destruction was so massive that it made the Taltali villagers lose everything, turning them into daily wage labourers. They do not have enough provisions of food and shelter - the basic necessities of life. They are living under the open sky, with only polythene roofs hovering over their head. This is an unfair struggle of survival against nature. At one side of Padma is India, and the other bank is Bangladesh. The BSF are guarding the Indian border, and the Bangladesh border is secured by Bangladesh Rifle. The vigilant eyelids the breeze cannot blink. But hunger has no borders. To sustain their lives and families, the natives of Taltali village conduct illegal smuggling. “Going to hunt birds” in Taltali is a code for “illegal cow smuggling”. If somebody asks “Where to go?” (“Kuthe Gichili”), in local Murshidabadi tone, it translates to “Where have you been”. But the coded language of the smugglers will translate it into “How is the guard at the border?” These are the strange coded languages of the illegal smugglers.

Mukutmanipur of Khatra block in Bankura district is situated by the bank of the Kangsabati River. The Kangsabati Dam has been constructed on the river with identical name. The year was 1954. The native aboriginals of this area belong to the ancient Austro-Asiatic language group. The Aryan culture disseminated here in the form of Jainism. In ancient times, the Jain religion arrived through the river ways and settled among the natives of Purulia, Bankura. It is a proven fact that the contemporary religious ideologies were influenced by the lives and conducts of the culture of these people. The proof remains even today.

Some of the locals speak of the Kangsabati River “This River is Kangsai” (“E Nodi Kansai Ache”). This is an emphasized phrase, as it seems that the people by the river have given all of the artistic acumen of their language in the nomenclature of their rivers. This is also the claim of Atikay Hansda, whose residence used to be where the Kangsabati Dam stands today. They have been evicted from the land where their forefathers used to live for the construction of the dam. He learned from his father in his early childhood that the name of the river is Kansai. Actually the words “Sai”, “Lai” are ancient. They mean, in Santali, “the water stream that strolls”. In Rarh Bengal, many rivers contain the suffixes such as “Lai” and “Sai”. For instance, Kansai, Silai, Nyansai.

Perhaps in some forgotten time in history, the forefathers of Atikay Hansda might have called this river Kansai. Hansda did not speak as an individual; he was representing all the natives of Rarh Bengal. The official name of Kansai River is Kangsabati. But the people here have chosen the name Kansai as it represents their own language, it has the connection of veins and roots. This brings out the fact that the people by the river love to call the river by the name that is close to their heart, not some official name.

North Bengal is identical to rivers, hills, and forests. The culture is presided over by water; the lands are surrounded by the river Sankosh. According to the language of Koch populi, “san” means residence, or home. “Kosh” is the corruption of “Koch”. Therefore, the Koch populi that lives by that river is the Sankosh River. Moreover, the Mechi River flows by the borders of Nepal and West Bengal. The nomenclature of this river is also based on the language of the Mech populi. That is, the river by which the Mech populi resides is the Mechi or Mechini River. This shows that the language of the people by the river is actually the language that expresses the river culture.

Pay close attention to the names of the towns and villages of North Bengal. Almost every name consists of the suffixes or prefixes of “Shili”, “Ti”, “Towa”, “Guri” etc. Every one of these additions means “water”. The entire North Bengal nomenclature is dependent on the theme of water. For instance - Siliguri, Maynaguri, Nimti, Eganti etc.

The Indian Sundarban delta consists of 102 small islands and the size extends to 9630 square kilometers. In 54 of the 102 islands, people have cut the forests and have started farming. The rest 48 islands are preserved forests. The Sundarbans identify itself with forests and rivers. Likewise, the spontaneity of the language and culture of this area is heavily influenced by their existence.

The local name of the Sundarban is Badaban. The intertwined and connected rivers that form the delta are known as “Bhorani” in the local tongue. The rivers that cause the ebb and flow of water are known as “Dowani” in the Sundarban. For instance, the Doorshadowani river. The river is bound to be connected with boats. The people of Sundarbans build various kinds of boats. There are several names for the various kinds of boats here - Kosha, Betnai, Khurab, Balia, Pawrowar, Pashta, Bajra, Mohangiri, Bepari, Chhoiwala, Bachhari, Balaam, Patina, Ulakhh etc.

Sundarban has its own folk songs. The song of Dakshin Rai, the song of Banbibi, the song of Fakirs, the song of Mati Kata, Sarul songs, Karam songs, Doshoi songs etc. The tigers of Sundarban are known as Dakshin Rai, and the theme of Dakshin Rai has inspired many songs. One such song is - “People listen to the tale of Rai/ The Choto Rai moves first/ later comes the Boro Rai/ As if the full moon is/ Haunted by the Rai like the new moon”. There is a proverb regarding Sundarban - “the crocodile in the water, the tiger on the land”. The people of Sundarban have to survive and sustain amidst these critical conditions. Nevertheless, language never fails to express the culture and psychology of the people. That is why the people by the river are able to retain the touch and smell of the river.